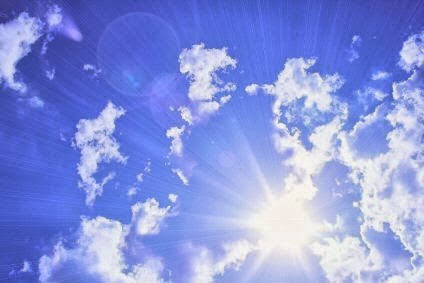 As I spend my 3rd weekend here at NIH, there are signs of progress.  They say I’m doing well today; my red blood cells and platelets seem to be holding, but my white cells (neutrophils) remain critically low.  My blood pressure is cooperating for the most part.

There’s nothing more to do now but wait and see how my immune system rebuilds itself. The horse serum treatment effectively killed off all my white cells, and they may take a while to get it back on track.

I’ve remained here because of high blood pressure they believe is contributed to by the steroids they gave me to prevent serum sickness. I’m doing everything I can on my end: watching what I eat, walking 3 miles a day, and of course using my TheraBands.  One of the benefits of treatment here is that I’ve lost weight… I think about 10 pounds! (probably because I haven’t had any beer in 3 weeks either!)

And these steroids have done wonders for my physique: 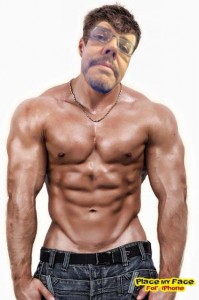 But I don’t think this new physique will last as I’m hopefully going to be off the steroids tomorrow. That will allow them to put me back on the cyclosporine drug that I will take for at least 6 months as my immune system rebuilds itself.  I’ve also started the eltrombopag drug that they believe will help my counts as well.  It’s just going to be a long road to recovery.

Oh, and Happy Birthday to my sister Marla and my son Andrew. See you guys next week! 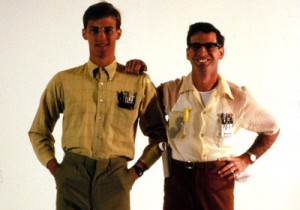 While I have a few extra days here at the hospital, I thought I’d tell you exactly what’s going on with my disease and treatment. I still have many people who aren’t totally clear (as well as myself), but I’ve spent a good bit of time reviewing the literature like a good little nerd. So here goes.

What is Aplastic Anemia?

Your bone marrow produces all the blood cells in your body. This is happening constantly. All these cells start out as “stem” cells which then evolve into specific types of cells. The 3 major types are Red Blood Cells, White Blood Cells, and Platelets. 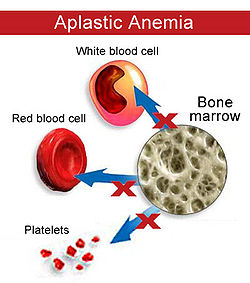 Aplastic Anemia is characterized by a significant reduction in those 3 types of blood cells: reds, whites, and platelets. This condition is known as “pancytopenia”. That’s what the doctors saw first on my blood work.

Aplastic Anemia is characterized by its severity. I have “Severe” aplastic anemia because my counts are so low. I believe when I came here I was actually “very severe.” The biggest risks from aplastic anemia are infection and bleeding. People can have “mild” or “moderate” anemia and continue onward, but no one survives without treatment in severe aplastic anemia.

While anyone can get Aplastic Anemia at any age, it’s more common in teenage males.

What’s with the blood counts?

Blood counts are critical to measuring my response and progress.  Steady (yet slow) increases in these numbers are good signs of response. 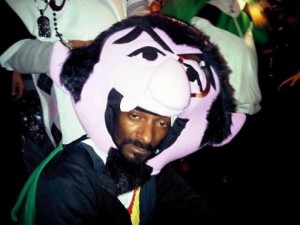 The red blood cells carry oxygen in the blood. The oxygen is attached to something called ‘hemoglobin’. When the hemoglobin is low, I get fatigued and out of breath. The low normal red blood count is about 4.5.  Today, mine is 2.7. Not too bad. My hemoglobin is 8.2, and the low normal is about 14. Again, not bad, but they tend to transfuse red cells when hemoglobin hits 8. I’ve been exercising regularly and hope that it’s been keeping my hemoglobin up. These cells live the longest in the blood, up to 120 days.

The white blood cells help fight infection.  There are several kinds of white blood cells. The most important cells for me are the “neutrophils” since they fight bacterial infection. Normally, they should be around 1700. But 500 is a good number to be at to reduce the infection risk. My biggest problem is that I’m only at 40. That makes me “neutropenic” and leaves me very susceptible to infection.  There’s nothing to do to increase the neutrophils unfortunately. We just have to wait. These cells unfortunately live in the blood only about 24 hours.

The platelets help stop bleeding.  They are normally about 150. When they are low (<10), I start to notice things like petichia (little red dots on my skin) or more easy bruising, or even sores in the mouth.  When that happens, I need to get platelet transfusions. Right now, I’m running at 32. These cells stay in the blood around 6 days.

Most of the time, the cause is unknown. In fact, they really only find a cause in about 25% of cases. These causes can be genetic, environmental, viral, or even nutritional! But all those causes have been ruled out in my case. Therefore, I am among the 75% of ‘unknown etiology.’ This makes it much more difficult to fix.

In my case, it happened relatively quickly. I had normal counts a year previous, and really didn’t have symptoms until about November, but wasn’t diagnosed until January.

What’s the treatment for Aplastic Anemia?

Immunosupression therapy starts by killing off my immune system that’s attacking my bone marrow. As you many of you have already read, they start with an infusion of horse-serum (ATG) for 4 days in the hospital. That kills all the white cells. Then, they provide a drug called “cyclosporine” which suppresses the action of the new T-cells I’m forming. The cyclosporine lasts at least 6 months. Cyclosporine is commonly used to prevent rejection of organ transplants.

As you know, I’m participating in a clinical trial here at the NIH. Dr. Neal Young, my physician here at NIH, actually ‘invented’ and researched the ATG-Cyclosporine protocol. As part of my clinical trial, they are using a drug called eltrombopag for 3 months in addition to the cyclosporine. I started that a few days ago.

Eltrombopag is approved by the FDA to increase platelet levels. Dr. Young and his colleague Dr. Townsley were using it for treatment after unsuccessful initial courses of ATG-cyclosporine. They began to see 40% of the patients increase their blood cell levels. So, they wanted to do a clinical trial on its effectiveness as a ‘first-line’ treatment. 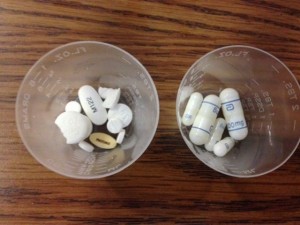 Untreated, severe aplastic anemia is fatal. But, there have been overall survival rates reported as high as 95% after 3 years!

Younger patients do better than older patients. There’s generally a 60-70% response rate with my treatment. Because I’m over 40, my chances of success are a little less than a younger person.  I basically have a 50/50 shot that my current treatment will be successful.  That number might be increased with the addition of the clinical trial drug they are giving me now.

Even if I do respond to this treatment, it may not be fixed. Based on the literature, 1/3 of patients ‘relapse’, and 10-15% evolve into a more serious condition, including leukemia.

If I don’t respond to this treatment by 3 months, the options are to provide another round of immunosupression therapy similar to this one, or if I have a perfect sibling match for bone marrow (which would be only a 30% chance), then I would be a candidate for a bone marrow transplant.

There’s not much else to do but be careful, calm, and pray. 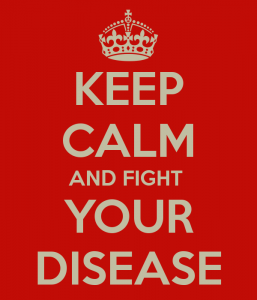 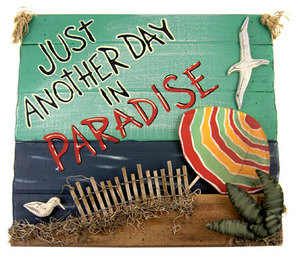 Phil Collins sang about it. Click on the video and listen to the music as you read along if you like.

Just another day in paradise. After a rough few days as you read last time, I’ve been looking for the positives as we spend weekend #2 at the NIH. 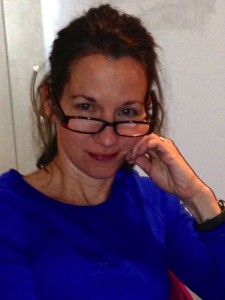 My cheerleader, cornerstone, and officer of positivity continues to keep me going.

I feel bad that my wife Angela has suffered through interrupted sleep on a convert-a-sofa for almost 2 weeks, cafeteria food 3 times a day, and my confinement. Yet, she battles on like me…. running up and down the stairs, wrapped in her Kindle novels, and never complaining.

I’ve been kept longer than I hoped because of issues keeping my blood pressure under control. Unfortunately, I entered here with a high blood pressure. High BP is also a side-effect of the chemo, and the docs are worried about me controlling it away from the hospital. I’m now on 4 different meds for blood pressure. They still need to increase my chemo dose, but are challenged by my stubborn blood pressure. Maybe this would help:

Angela Says: “At least you aren’t at home going back and forth to doctors and the pharmacy. You need to be here.”

Every time the nurse takes my BP, I get anxious — fearful it will spike again, keeping he here longer.

Angela Says: “The more you worry about it, the higher it will go. So, stop worrying!”

I’ve been put back on contact and respiratory isolation — extra precautions for an immunosupressed patient floor. I’ve also developed a very delayed reaction to the horse serum: a rash covering my torso. Not unexpected, but not welcome. At this point, it doesn’t bother me, but I’m still at risk for other serum sickness symptoms such as joint aches as they try to reduce the corticosteroids.

Angela Says: “It could be a lot worse. If this is all you get, then we are good. It could have been much worse.”

A big part of my own treatment plan is “Exercise is Medicine”. As a Fellow of the American College of Sports Medicine, I’m passionate about their Exercise is Medicine initiative, which tries to promote more exercise prescription for health.  I continue to walk 3 times per day with Angela. We have a regular route of about 20 minutes over the length of the NIH (it’s quite long!). Today we hit a record. And I still haven’t been outside for 11 days. 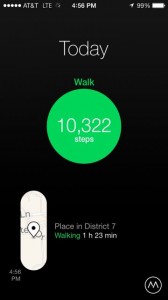 Angela Says:  “Remember when you used to hate walking for exercise?”

But the best news is that my blood counts remain unchanged. Still low, but not dropping. That’s a good sign. I don’t need a transfusion today. The goal is to decrease the frequency of transfusions to become less dependent. So it seems something might be working!

We still have to take this “Page by Page” as my daughter Hannah says. They are still optimistic that I’ll be home Tuesday. We’ll continue doing what we can to make that happen. Angela is the reason I’ve made it this far.

So, send us some more #MOJO to get us home and move forward on the next step of treatment.